When I first picked up Jessica Knoll’s debut novel, Luckiest Girl Alive, I didn’t really know that much about it other than the fact that it was part of my favorite genre.  It had been getting great press and was being compared to multiple books that I have read including Flynn’s Gone Girl (ok, I have still not read this one, but I saw the movie) and Harrison’s The Silent Wife ( you can read my post here A.S.A. Harrison’s The Silent Wife).  So, I decided to give it a shot.  And it was not at all what I had expected.

The book follows Ani FaNelli, a young woman who is striving to create the perfect life for herself.  She has a glamorous job working at a magazine and a handsome fiancé from a well-to-do family, but events that happened in her past keep finding their way to the surface and threaten the life that she has carefully pieced together.

While Knoll does alternate between the past and the present, for the most part, the story takes place in the past.  It is there where we learn of the private pain and public humiliation that Ani (TifAni back then) had to endure.  And while we do feel for her, there is something dark and sinister underlying throughout that at times makes you question just how honest the narrator is being.  But also, it makes you wonder whether it is possible for someone who went through as much as she did to go on living a normal life without unconsciously trying to sabotage it.

It’s always nice when there is a character that you like in a novel, one that you can somehow relate to.  Ani isn’t likeable.  In fact, none of the characters really were, but they were also more in the background.  In Ani, we quickly find a character shift.  In the beginning she is a strong, put together, successful woman, but that soon changes and for most of the novel she is just that scared, traumatized young adult who’s only ‘coolness’ is the façade that she passes on for reality.  Ani wasn’t likeable, but she is relatable.  There are many people out there who never show their true characters, who never let others in for fear of getting rejected or hurt or labeled.  Ani drives this story forward because even though you don’t care, you want to know what happened, you want to know what she went through and you want to know how it turns out.

“Around her the city is living its nightlife….But here in the passageway where she lies, there is no life.”

What if understanding death could help the living?

In Lene Kaaberbol’s novel, Doctor Death, the reader is brought back to a time when doctors had to fight in order to perform autopsies. It is 1890s France, and a young woman is found dead in front of her home, but the cause is overlooked because the family forbids an autopsy, and so a diagnosis cannot be properly determined. After a few more bodies are discovered to have some of the same symptoms as the young woman, a pathologist and his daughter Madeleine take it upon themselves to search for the true cause of her death. When her father turns up injured, will Madeleine be strong enough to shoulder most of the work herself?

What I find to be interesting of this novel, and of all period pieces really, is that it takes you to an entirely different world, one where rules were made according to gender (oftentimes) more so than by qualifications. It was unacceptable for women to do many things, and most of them resigned to that fate, to being considered the weaker sex. And here is Madeleine, desperate to become her father’s (Doctor Death) partner rather than his occasional assistant. Her work and success is limited merely because of the fact that she is a woman, but that doesn’t stop her from trying. Which is a big part of what this novel is about. One woman, going against the societal norm in order to pursue her life’s passion.

Doctor Death is at once a gripping mystery and a coming of age story that takes you on a journey to find the truth. It is definitely one to add to your collection.

How do you go on living your life, knowing that there’s a part of you out there that is missing?

In Khaled Hosseini’s third novel, And the Mountains Echoed, he explores relationships that we have with ourselves and our families. How, one choice, one decision, has the power to not only change our lives, but theirs as well. How the people that are closest to us will go to great lengths in order to do what’s right, sacrificing everything they can, but also how sometimes people surprise you when you need them the most, destroying hopes that you never knew you had. Spanning generations, Hosseini takes the reader on a journey across continents, delving into the complex relationships of family and how things don’t always turn out the way you want them to.

Starting with siblings Pari and Abdullah, who are separated by extraordinary circumstances, we follow them and others through the aftermath, and witness the true power of love and how the loss of it can stick with you throughout a lifetime.

“It is important to know this, to know your roots. To know where you started as a person. If not, your own life seems unreal to you. Like a puzzle….Like you have missed the beginning of a story and now you are in the middle of it, trying to understand.” 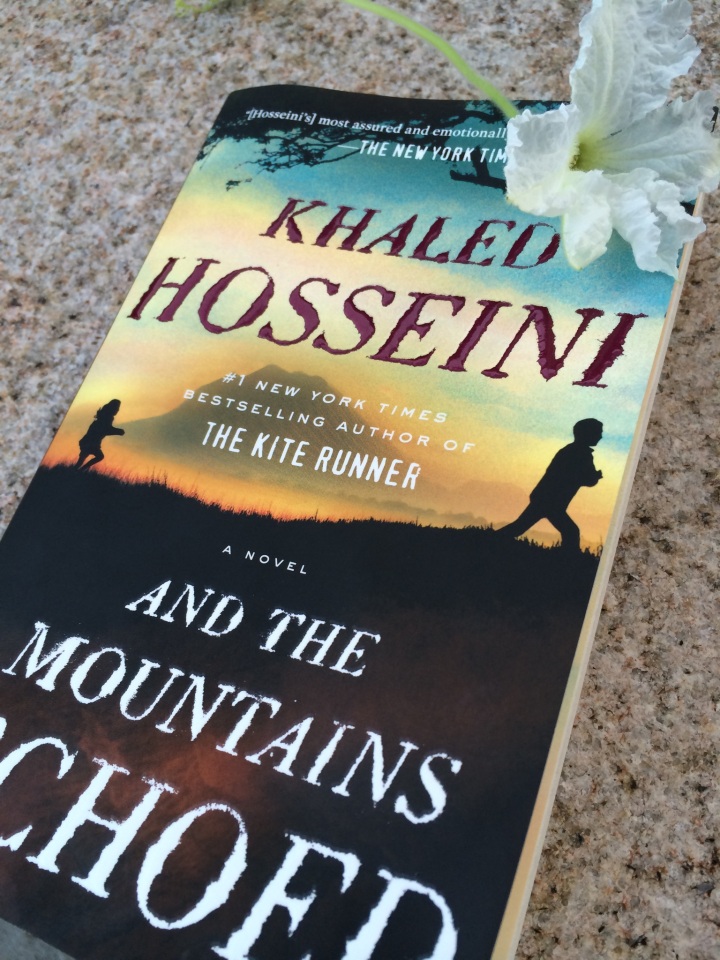 In Amy Hatvany’s new novel, Safe With Me, published in March by Washington Square Press, she weaves a tale of abuse, loss and unconditional love through three distinct alternating narrations of two women and one teenager, who are connected long before they meet.

It had been nearly a year since Hannah Scott lost her daughter as she was biking out of their driveway and hit by a car. Since then, she threw herself into her work, opening up a second hair salon and moving into an apartment above it, trying to pick up the pieces when all the while she’s still devastated by it. It’s not until a new friend walks into her life (and her salon) with a connection to her daughter that she is finally able to face the situation and start healing.

Olivia Bell has lived her life in fear for a long time, fearful of her husband’s sometimes abusive tendencies, and fearful of her daughter Maddie’s struggling health, which, after an organ transplant a year earlier is finally improving enough that she can return to school. It is when Olivia picks Maddie up on her first day back in tears that she decides to make her daughter feel better…by taking her to the grand opening of a new hair salon in town. Little do they know that their trip to Hannah’s salon will change their lives forever.

At the heart of this novel lies the concept of the power of emotions and how strongly they can affect us, sometimes without us even knowing it. Hatvany makes us take a look at our own lives and relationships, past the ideals, past the rose-colored glasses, and allows us to see them for what they really are (were).

“We try on personalities like second skins, learning to present only the best versions of ourselves to the world, fearful of what might happen if we reveal just how imperfect and vulnerable we really are. But it’s these imperfections…these struggles, that truly connect us.”